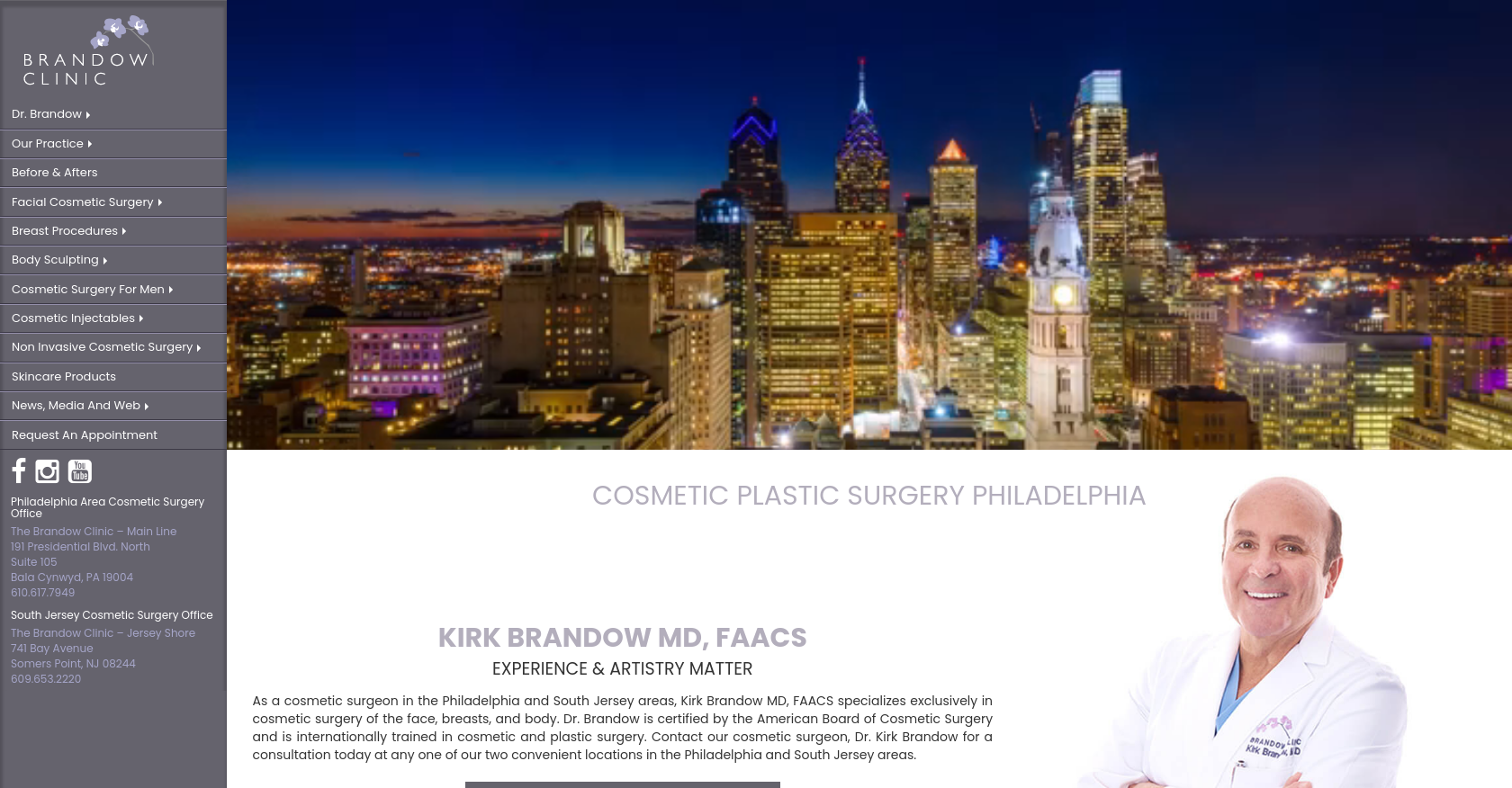 Dr Brandow is Founder and Director of The Brandow Clinic for Cosmetic Surgery and Medical Day Spa. The doors of his private clinic and medical spa first opened in 1997, in Philadelphia suburb, Bala Cynwyd, PA. In 2002, the 10,000 sq. ft, Delaware Valley surgicenter (DVOSS) was built above the Brandow Clinic, where Dr. Brandow now operates three to four days a week. In addition, Dr. Brandow has been on staff at many area hospitals, but currently maintains hospital privileges exclusively at Mercy Suburban Hospital in Plymouth Meeting, PA. Due to his overwhelming success, a second office, located in Somers Point in Southern New Jersey opened in 2005.Prior to the 1997 opening of his Philadelphia practice, Dr. Brandow's impressive resume included Chief of Cosmetic Surgery at three of Allegheny University Hospitals and Director of Fellowship Training Program in Cosmetic Surgery at Philadelphia's Graduate Hospital. Due to his distinguished qualifications and expert knowledge of cosmetic surgery, Dr. Brandow was named Associate Editor of the International Journal of Aesthetic and Restorative Surgery.He has developed many innovative, minimally invasive procedures for the face, body and skin. These procedures include multiple techniques of liposculpting and body contouring, the 48 hour facelift, laser treatment and the invisible-scar-less breast implant. His newest perfected procedure is the Boomer Lift, a scar-less neck and jaw linel lift, which he launched in 2011 and is attracting international acclaim for this innovative new procedure. Dr. Brandow's professionalism and expertise in progressive treatments led him to be named "Top Doc" for BodyContouring in 2000 and "Top Doc" for Cosmetic Surgery in 2001 by Philadelphia Magazine. He was also named "Best Plastic Surgeon on the Main Line" by Main Line Life in 2006, 2007, 2008 an again in 2011. Dr. Brandow was nationally nominated by his peers as one of Americas "Top Plastic Surgeons" in Plastic Surgery Practice.